Where It All Began

My aunt recently moved into a nursing home, and as a result, she’s decided to vacate the apartment in which she’s lived for nearly twenty years. My father, her devoted brother, has taken on the mammoth task of going through all of her belongings and making the painstaking choices of which items will be kept and which items will be discarded or donated to charity.

A few weeks ago, while I was visiting my parents, my dad brought out a dusty box of framed photographs that he’d found at my aunt’s apartment. Inside were several decades-old family portraits, as well as annual school pictures of my sister and me. On the bottom of the stack, I discovered this frame, which I’d given to my aunt for Christmas back in 2003. 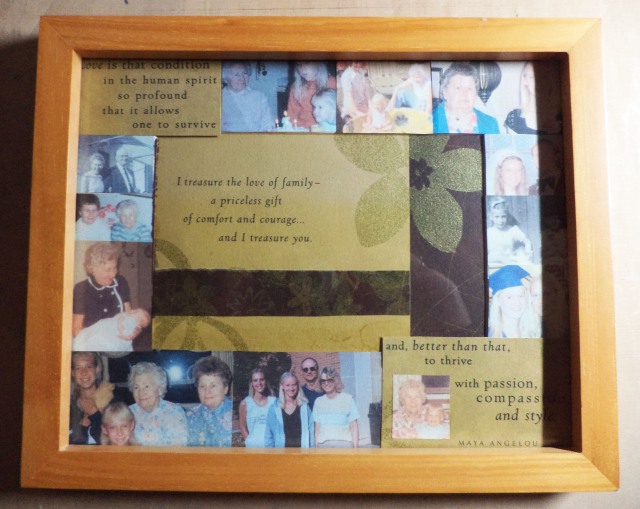 At the time, I was a 25-year-old teacher in my second year of service at an inner-city school. I didn’t have much money, but wanted to give her something heartfelt and meaningful. I hadn’t yet begun my journey of creativity, and had not yet learned about scrapbooking or mixed-media art–but I remember being drawn to the old pictures in our family albums, and feeling an inexplicable urge to make something with them.

I wanted to make a collage with the pictures and a Maya Angelou greeting card I’d bought, but I had no idea what I was doing. I didn’t realize that when copying photos, one should use high-quality photo paper; I’d copied mine on regular old typing paper. I didn’t know that when trimming paper, one should use a rotary trimmer for razor-straight edges; I used a regular old (and dull) pair of scissors (which, incidentally, I cut myself with at one point during the project–requiring that I go to the ER to get a tetanus shot!). I didn’t understand that when gluing paper down, one should always use an acid-free adhesive; I used regular old rubber cement.

In looking at this frame, it’s easy to notice the imperfections: the jagged edges, the places where the rubber cement is beginning to eat away at the card fragments and photos. However, it’s also easy to notice the love of family that Maya Angelou speaks of, the decades of stories represented in each photo, the ties that bind over three generations, beginning with my grandparents, continuing with their children–my dad and aunt–and carrying on with my sister and me.

Equally important, it’s easy to notice that this moment marked the beginning of my identity as a creative person. The urge I’d felt, which compelled me to make this piece, didn’t end when the frame was finished; it had only just begun. Within the next year, I would wander into my local craft store and purchase my first scrapbooking supplies, which included, ironically, premium photo paper, a rotary trimmer, and, you guessed it: an acid-free tape roller (smile!). Within five years, I would make the transition into collage and mixed-media. Who knows what will come next in my creative journey?

Sometimes, when people ask me what I do and I tell them I’m an artist, I can’t even fathom it. In 2003, which isn’t really that long ago, I would’ve laughed and called crazy anyone who told me that in the future I would be creating art. It just goes to show that even the smallest step can bring you into a whole new world of possibilities–if you are brave enough to take it.

I am a mixed-media artist who loves collage, bookmaking, journaling, and memory art.
View all posts by Jenny Petricek →
This entry was posted in Scrapbooking/Memory Art and tagged memory art, Photo art. Bookmark the permalink.

Big adventures in a small world

sharing my experiments in crafting

Unwrap your gifts of self-assurance and joy

Because we’re all recovering from something.