“D is for Dennis”

The fourth page in my ABCs of Alice journal is called “D is for Dennis,” in honor of Grandma Alice’s second child and only son, Dennis, who also happens to be my father. 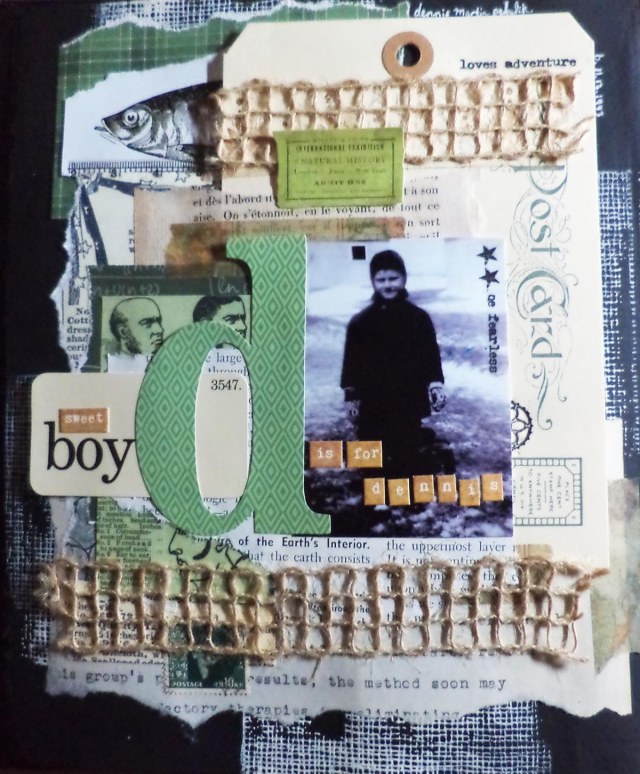 Grandma Alice did a wonderful job raising my dad, and he was always a dutiful and devoted son. When Grandpa Mike passed away in 1973, my dad, who was approaching thirty, willingly stepped into his shoes, taking on his father’s responsibilities for the next 25 years. He performed all of the maintenance chores at my grandma’s house, making it possible for her to continue living there in her old age. He mowed the lawn once a week, which was not an easy task considering that it was on a large lot and situated over a steep bank. He took care of the snow removal every winter. He painted the house and made repairs whenever necessary. He made sure her car was in running order. As she entered her 80’s and began showing signs of dementia, he patiently took her to doctor’s appointments and checked in on her daily. He did all of this without complaint, even as he worked a physically demanding job and maintained a household of his own.

After Grandma Alice passed away in 1997, my mom’s parents, who were in their 70’s, began slowing down. He’d always been like a son to them, and thus he felt compelled to help them in the same way he’d helped his own mother. For the next decade he made their comfort and happiness his priority–and I know they loved him for it. Because of his efforts, they too were able to spend most of their golden years in their home. When my Grandma Loretta had asked me to be one of her powers-of-attorney in the days leading up to her death, I declined and recommended that she choose my dad, because I felt he could be trusted more than anyone with the duty of carrying out my grandparents’ wishes.

One of Grandma Alice’s greatest legacies is her son. She instilled in him the love of family and a deep sense of responsibility to do what is right and to help others. I’m so proud that he’s my dad!

For this page, I started by selecting a vintage photograph of my father as a young boy, standing in the backyard in his winter clothes. The background was created with black gesso and stamped acrylic paint, and the collage was built with vintage paper, old book pages, scraps of patterned paper, ephemera, Washi tape, a Tim Holtz Flashcard, burlap trim, stickers, rub-ons, and a pen. I purposely picked out items that I thought reflected the essence of him as a person, such as a net-patterned stamp and an image of a fish head (he’s always loved fishing) and papers with science-related print or mathematical equations on them (he’s always had an aptitude for those subjects–talents which were not, incidentally, passed on to this daughter!).

Thanks for stopping by today! Hope your weekend has been wonderful!

2 Responses to “D is for Dennis”

Big adventures in a small world OR Graphic novels with dolls

Vegan-Friendly Stories for all ages

sharing my experiments in crafting

Unwrap your gifts of self-assurance and joy