The newest page in my ABC’s of Alice journal is entitled, “H is for Home.” The star of this page is Grandma Alice’s house, which she called home for more than 50 years. 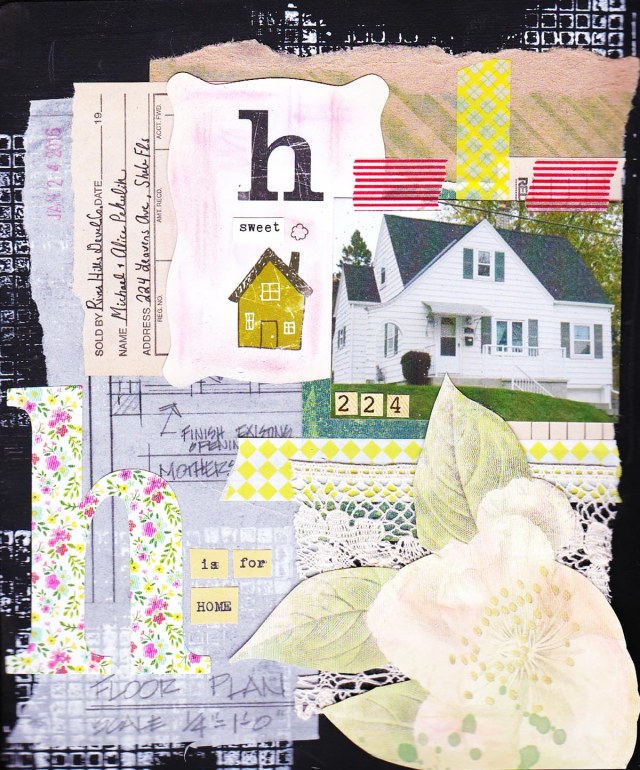 In the early 1940s, my grandfather Mike Pekulik was a newly-married man who dreamed of raising his family in a home that belonged to him. He’d worked for many years as a factory laborer at Kohler Company in Sheboygan County, Wisconsin, and although the majority of his fellow employees chose to live in the carefully designed and strictly regulated village of Kohler (which had been incorporated in 1912 as a model company town), Mike didn’t care to live in one of the cookie-cutter homes that had to be painted a certain color and shared a driveway and garage with the house next door; he also didn’t want to be required to ask the company’s permission to put up a fence or build an addition.

So Mike came to the decision that neighboring Sheboygan Falls was where his house would be. He and his wife Alice purchased some land on the west side of town, on tree-lined Leavens Avenue. The plot would be challenging to build upon, as it was perched atop a steep bank that sloped downward to the street. In fact, the only way to create a viable driveway was to plow right into the bank; the attached garage was built into the side of the bank, and ended up being part of the basement of the home. A fieldstone retaining wall also had to be constructed, to support the bank on both sides of the driveway. 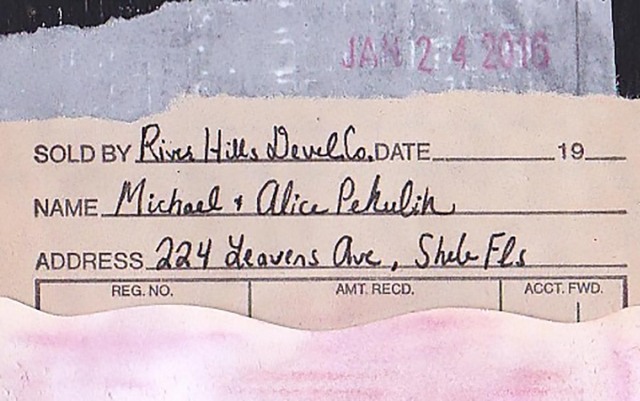 The Cape Cod home at 224 Leavens was small but cozy. The bedrooms were tiny, but Grandpa Mike and Grandma Alice ensured they’d be uncluttered by adding built-in shelving and cabinets, eliminating the need for extra furniture. The first-floor bedrooms were the smallest, but they saved room by having the builders construct one closet that could be accessed in both rooms. I can remember my sister and I playing hide-and-seek as children, and “disappearing” from one room by sneaking through the closet to the other. In the second floor bedrooms, which had low, sloping ceilings, little mini-closets were built into the crawl spaces behind the walls.

The living room and kitchen were also diminutive in size, but my grandparents added special touches like baseboards and crown moldings to make them fancier. Many of the rooms had beautiful wood floors.

Off the kitchen was a sun porch, where my aunt Karen’s dollhouse sat on a table; decades later, my sister and I enjoyed playing with the fully-furnished antique play set. My parents have the dollhouse today, and each time I see it, I’m always tempted to move the furniture around to the way I arranged it as a kid. Over the sun porch was a second-floor balcony, which Grandma Alice feared would collapse if we played on it, but we did anyhow. I loved standing on it, because the leafy branches of the centuries-old trees in the backyard hung over the railings and provided a secluded spot from which to spy on others without being seen.

Grandpa Mike wanted a fenced-in yard, but not just any fenced-in yard. He wanted it to be unique, and to fit seamlessly with the house. He asked the builders to design an arch off the left side of the front facade, and placed a gate inside of the arch. A fence extended off to the side and surrounded the entire yard. The fence had been torn down by the time I was born, but I’ve seen photos of it; the arch still remains. He also built a cute little white shed behind the house, which contained his workbench and tools; they remained there long after he passed away in 1973. I remember going into the shed often during my childhood. I loved it because being surrounded by his things made me feel closer to the grandfather I’d never met.

Grandma Alice lived at 224 Leavens Avenue until she died in 1997 at age 87. Some new owners moved in, and then the property changed hands a second time. Recently my sister notified me that the house was on the market yet again. She sent me a link to Zillow, and I was able to see a full gallery of interior and exterior photos of the house. The rooms were almost unrecognizeable. While some of the updates were much needed and made the house appear more modern and spacious, I found myself feeling somewhat dismayed at a few of changes that had been made. I was sad to see that the built-in shelves in a bedroom had been plastered over and covered with drywall, and that some of the crawl space closets had been sealed. Furthermore, it just didn’t seem right that stainless steel appliances had replaced the 1950’s-era stove and refrigerator that Grandma Alice used. Someday I’d like to drive over to the house, knock on the door, and walk through it. I wonder, will it smell the same? Will I feel the presence of my grandparents as I pass from room to room?

This page was created on a background of black gesso with a pattern stamped in white gesso, and contains patterned cardstock and paper, a vintage sales receipt, a scrap from an architectural blueprint, a flash card, a piece of lace, a flower trimmed from paper, Washi tape, stickers, text produced on a vintage typewriter, and a photo of the house.

Thanks again for taking the time to stop by! See you soon!

9 Responses to “H is for Home”

the beautiful world of watercolour painting

Big adventures in a small world OR Graphic novels with dolls

Vegan-Friendly Stories for all ages